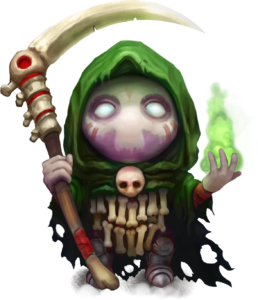 Pahom is the omnipresent Lord of the Dead. A great character for fans of badasses. He has the ability to delay enemy development and then take advantage of of his troop advantage to destroy them or play the late game and basically get a free building every couple of minutes. Medium difficulty. 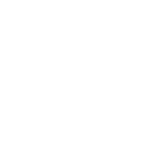 “Downgrade” can be used on enemy buildings, either villages or towers, and reduces the building’s level by 1. This can also be used to also cancel an opponent’s upgrade. Try to use it when they are on the verge of upgrading a building from level 3 to level 4 – it will drop to level 2! In 3 or 4-player rating matches choose you target from the beginning and prevent it from developing. Just be careful when making your choice – an experienced player might withstand a long-distance attack before counter attacking in turn. If you choose instead to focus on a weaker player then a stronger opponent can quickly gain an overwhelming advantage by capturing their buildings. Try to keep an eye on your opponent’s upgrades – if you notice that they spent 30 units then that’s not an upgrade but a conversion. Using this skill at this point will stop the conversion and means your opponent will have spent 30 troops for nothing. Experiment and choose the strategy which suits your game play best. You can either try and spam this skill to gain a unit lead, or save up for different abilities later on, whichever fits your playstyle more. Small note, but if you are experienced, you can stop your opponent from changing a level 2 or higher buildings into a forge with the skill as well, which can cripple an upcoming attack. 20-40 second cooldown. 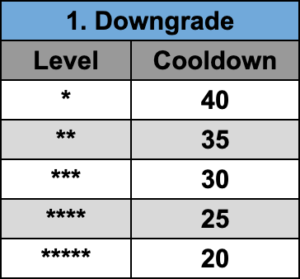 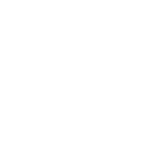 The “Ressurection” skill recovers 80%-100% of units that were killed in the last 5 seconds in the selected building. Amazing for when your opponent launches a heavy attack on one of your buildings and you need extra troops to defend it. You can also use it just after an attack has ended and when you need more troops to defend against the next attack. Even if you successfully defend, you can still use it to gain a bunch of troops and go for a counter-attack as well. Better to use as late as possible, but don’t use it too late. 40-60 second cooldown. 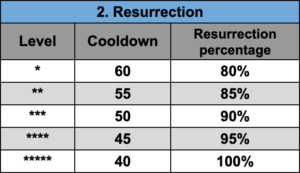 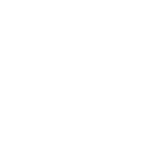 “Home” returns all units in a specific area to their starting points. This is not instantaneous and there is a delay before the units return. If a building is lost before the troops return, those troops die. It works like Trini’s 3rd skill and Ayner’s 4th skill, in which the effect is also not instantaneous, at first affecting units in the center of the area and moving towards the edge with around a half second delay .This is a very versatile ability that can be used in many ways. You can use it at the early stages to sneak into an important building that the enemy was attacking, sending their troops back home at the last second beforing capturing it yourself. It’s mostly used to counter opponents’ skills, but can be used for more advanced tactics as well, such as going for a behind-enemy-lines attack, then homing your own troops to attack the front line or trying to take your opponent’s buildings while they attack then use it on their troops, killing them. 70-100 second cooldown. 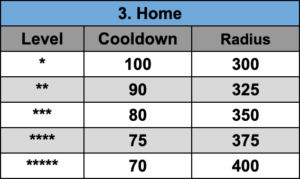 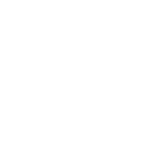 “Panic” forces 85-100% of units to leave the building, dispersing into other enemy buildings after a 1-2 second delay. You have to time this properly, or your attacking force could enter the building before the troops inside have fled, leading to defeat. Normally you want to avoid using this on neutral buildings and instead save it for key buildings that your enemy controls. Also note if you use this on the last building of a certain color, it will not work, as it can only send units to buildings of the same color. Only use this skill if you know your opponent cannot counter it or if you are trying to bait out a skill, as it can basically just give you a free building. 100-140 second cooldown.