The Forge, unlike the villages and towers, can only be tier 1. You can get more benefits by having multiple forges. The more forges you have got, the more attack and defense you can get. 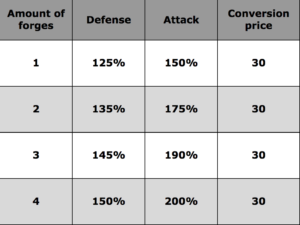 The player with more forges will have a significant advantage over the opponents with less. Although more forges are good, there is no reason to exceed 4 forges. As you get the maximum effects of the forges at 4 in total, and a 5th won’t add any bonuses. Try and follow this simple rule: for every four buildings that produce units (types of villages), build 1 forge. You then will most likely be able to restore units for attacking or defend while have a nice attack and defence boost.

Although the forge does increase defense, it gives so much more bonus attack. It would be in your favor to turn at least on of your buildings into a forge before attacking so that you can have more of a attack power and a better chance of taking the opponents building. You can do this before the attack, or as your units are moving, but be sure you have the forge before your units enter the enemy building.