Morale is the most important thing in the game. It affects attack, defense, and the marching speed of the troops.

Today we’re going to talk about the usage of Morale to your advantage and how to correctly use it in all situations, both attack and defense! Morale is the reason that an unfair battle can be balanced out, Morale is what helps you make a great comeback after a tough situation and Morale will always be your best friend in every War!

The only thing that truly matters with Morale is that the more you have of it, the better your position is! Morale is represented with Suns (displayed on the top of your screen) and you can have all from 0 to 5 Suns at max. Half Suns don’t count; they only show how far you are from the closest whole Sun.

To increase or decrease Morale levels (Suns), you must either gain or lose a certain amount of Morale points.

The following information describes how your Buildings and Units corresponds to your Morale.

At the very beginning of a game when you start off with 0 Morale, your Buildings will defend at 100% per unit. Meaning for every 10 Units your opponent attacks you with, 10 of your own Units will also be lost in the battle. Same goes for how strong your Units are once you attack them. At 0 Morale you Units also march at 100% the speed. Here we are not considering the remaining coefficients of your defense. For example what kind of building that is being attacked and how many forges the Opponent owns. We’re talking only about Morale coefficient so keep that in mind. There are a lot of other things which affect on attack and defence coefficients which we might be telling you about in future.

These Percentages corresponds with how high your Morale is at the moment. Meaning that the higher the Morale you have, the Stronger and Faster your Units will be!

Increase and decrease of Morale generally has to do with what is going on with your Units in the battle, but there are other factors too. There are many ways to earn Morale points:

With each additional sun, you troops will move faster, attack stronger, and be able to defend better. 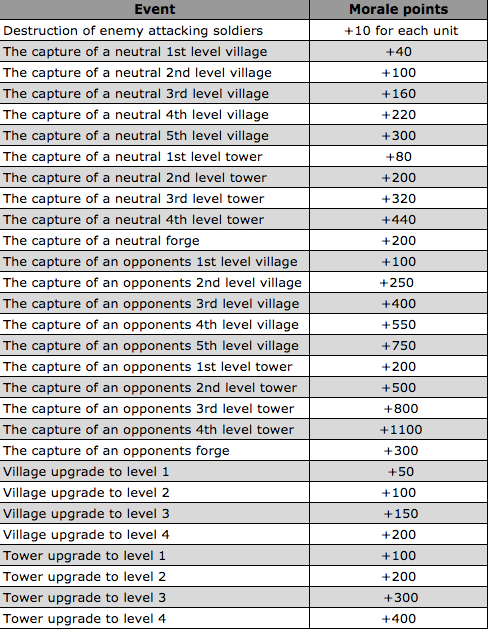 You will lose Morale points when following happen: 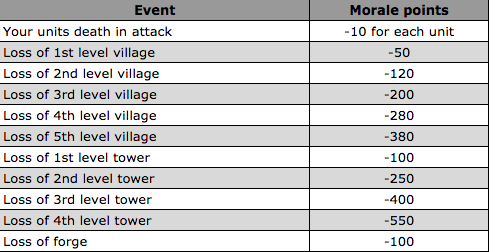 The goal with Morale is to always be the one with the highest among all your opponents! Always watch your own and your opponents Morale, at all times. A great thing to do whenever you find yourself in situation with less Morale than your opponent’s, is to keep defending their attacks, using Units and Abilities, but also importantly not to attack them until you have a higher Morale than they do! More often than not, it’s smarter to wait for your opponent to attack and defend it, and then attack with a morale advantage. Rather than just attack with less Morale. The more of a Morale advantage you have, the more successful your attack will be.

If you have a Morale advantage, it’s a good idea to use it and attack rather than playing it safe while it decays. If your opponent has more Morale than you do then it is a bad idea to attack. Just sit back and either upgrade towers and villages to help equalize Morale, or just wait for your opponent’s Morale to decay.

A good way to stop your Morale from decaying is to turn some buildings into towers and upgrading them, and if fully upgraded, turning them back into villages and then upgrading them. This helps you to keep earning Morale and not have all of it decay away.