Trophy Road feature was added to the game within [Update 4.5]. 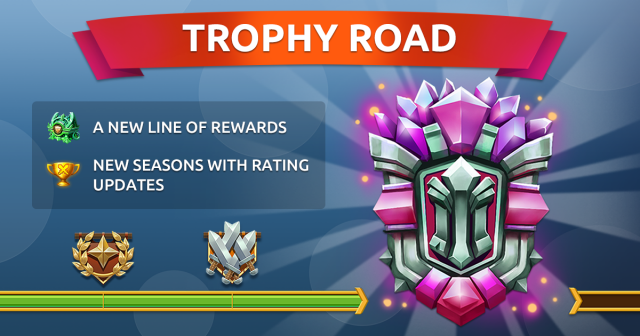 There is more sense in climbing the ladder now. Only by playing ranked games and collecting ranked points, you unlock valuable rewards and game features.

It’s worth mentioning that the total number of ranked points is the sum of all your hero’s ratings; the higher you climb with the hero, the fewer points you will get by winning with that particular hero. Therefore, it is recommended to play different heroes.

As mentioned above, other than valuable rewards, game features are also available to be unlocked on Trophy Road by everyone. However, only beginners will be able to notice it. Experienced players with enough ranked points after the season’s end reset will have all of them already unlocked.

Here is the list of all game features on Trophy Road:

Seasons last one calendar month. However, the duration of the incoming seasons could be changed in the future. Fortunately, it will be transparent for everyone and visible directly in-game on the Trophy Road screen.

Ranked points will be reset to a certain amount within each season’s end.
The reset will be based on heroes’ ranked points: